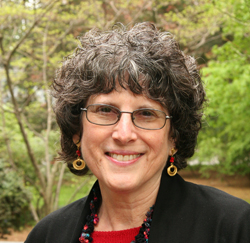 Diane E. Levin, Ph.D. is Professor of Education at Wheelock College in Boston, Massachusetts where she has been training early childhood professionals for over twenty-five years. She teaches courses on play, violence prevention, action research and a summer institute on “Media Madness”. She leads an annual service-learning program for Wheelock students and alumni to Belfast, looking at on “How Schools Can Help Communities Affected by Conflict Heal: Lessons from Northern Ireland.”

An internationally recognized expert, Levin helps parents and professionals understand and counteract the harmful effects of such societal forces as violence, war, media and commercial culture on children. She gives over thirty keynote addresses, trainings and workshops for parents and teachers a year—throughout the United States and in such countries as Australia, Great Britain, Greece, Jamaica, New Zealand, Northern Ireland, Portugal, the Republic of Ireland, and South Korea.

Levin’s newest book is Beyond Remote-Controlled Childhood: Teaching Young Children in the Media Age, released by the National Association for the Education of Young Children in 2013. Her previous book is book is So Sexy So Soon: The New Sexualized Childhood and What Parents Can Do to Protect Their Kids (with Jean Kilbourne). Her earlier books are: From Conflict to Peace Building: Lessons for Early Childhood Programs around the World (with P. Connolly & J. Hayden); Teaching Young Children in Violent Times: Building a Peaceable Classroom; Remote Control Childhood? Combating the Hazards of Media Culture; and, The War Play Dilemma (with N. Carlsson-Paige). She has also published extensively in early childhood and education journals as well as in the popular press.

Levin has been a consultant for a wide range of projects, including five PBS Parents web sites: “A Parents’ Guide to Girls,” “Talking with Children about the News,” Talking to Kids about War and Violence,” “How to Raise a Child Who Cares,” and “The PBS Parents Guide to School.” She was a senior advisor for PBS Families Magazine from 1997 to 2005. Levin has worked on the American Psychological Association’s “ACT Against Violence” Project and Consumer Reports annual toy review article. She developed statewide violence prevention training for childcare providers for the State of Maine. She also was the Expert Panelist for 3 New York (SUNY) statewide child care training videoconference sessions: “How Media Affects Gender and Sexual Development,” “The Sexualization of Childhood,” and “Violence Prevention: Creating a Safe Haven for Children.”

Representing Teachers Resisting Unhealthy Children’s Entertainment (TRUCE), Levin co-wrote the new guide, Facing the Screen Dilemma: Young Children, Technology and Early Education, with Susan Linn (Campaign for a Commercial-Free Childhood) and Joan Almon (The Alliance for Childhood). She also co-wrote The “So Far” Guide for Helping Children and Youth Cope with the Deployment of a Parent in the Military Reserves for Project SoFar.

As a longtime activist, Levin is a founder of Defending the Early Years (DEY), which advocates for the rights of young children for appropriate early education; Teachers Resisting Unhealthy Children’s Entertainment (TRUCE), which prepares materials to help parents deal with the media and commercial culture in their children’s lives; and, the Campaign for a Commercial-Free Childhood (CCFC), which works to education the public about and end the commercial exploitation of children.

Among her awards and recognition, from Wheelock College Levin received the Edward H. Ladd Award for Academic Excellence and Service in 2010 and the Gordon Marshall Research Award in 2006 to assist in the preparation of her book, So Sexy So Soon. In 2009 she received the Family Adovocate of the Year Award from the Boston Parents’ Paper. In 2003, she was the recipient the Abigail Eliot Award for contributions to the early childhood community from the Boston Association for the Education of Young Children. She has testified before the US Senate Commerce Committee on the harm caused by marketing violence to children through the media and the Massachusetts Legislature on the harm cause by marketing to children in schools and on the importance of passing proposed legislation that mandates the teaching of media literacy in Massachusetts schools. 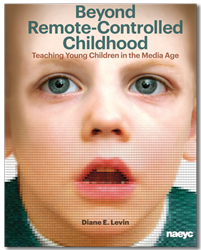 “Never has it been more urgent for all who are responsible for the care, development, and education of young children, as well as for those involved in creating relevant legislation and regulations, to learn from Diane Levin’s extensive experience and research on media-related issues. This book includes recommendations and suggestions for how teachers and parents can best protect and promote the well-being of all our young children.” —Lilian Katz, Professor Emerita, University of Illinois

“As a premier expert on children and the media, Diane Levin understands how today’s media culture is impacting children. This book analyzes how all types of media—television programs, videos, video games, websites, music, advertisements, apps—are affecting children’s lives, including what and how they learn from these experiences, and provides realistic suggestions to teachers for what to do about it.” —Blakely Bundy, Executive Director, The Alliance for Early Childhood

“Diane offers wise and timely advice to early childhood teachers about how to help children get beyond the powerful and pervasive media messages that can lead to remote-controlled childhood.” —Stephanie Feeney, Professor Emerita, University of Hawaii at Manoa

"Diane Levin has brought a social justice lens to the issue of the media's impact on young children—and how the adults in children's lives can play a positive role. In this volume, Levin blends research, personal story, anecdote, teacher experience, and concrete curricular and action suggestions. We don't know of any other resource that is so astute and so practical." — Rethinking Schools

Buy from NAEYC.org | Buy on Amazon